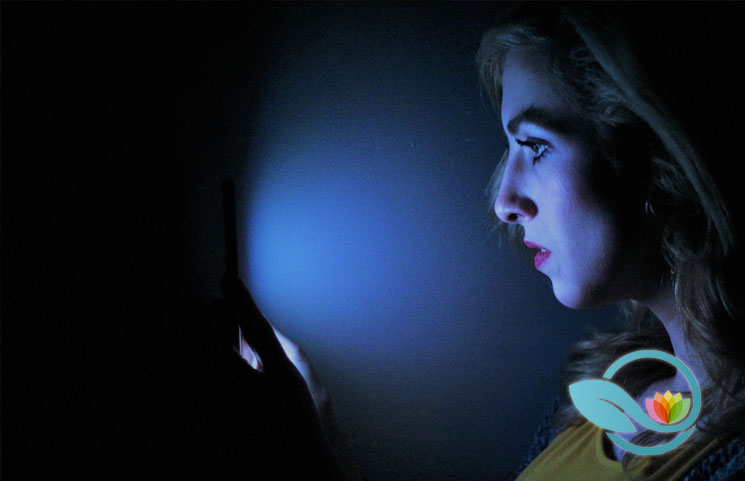 New research shows that blue light emanating from the sun and digital screens is disrupting your body’s circadian rhythms. While this effect has been demonstrated in the past, a new paper published in Scientific Reports shows just how much blue light is messing with our eyes and our sleep schedules.

If you have ever struggled to sleep after staring at a phone screen for the past hour, then it’s possible that blue light is affecting your sleep schedule.

Humans can see a thin spectrum of light, ranging from red to violet. Light with a shorter wavelength appears blue, while light with longer wavelengths appears red. When you see white light, you’re actually seeing light that comes from every color in the spectrum.

Researchers have long known that high-energy visible light – including light from the sun and your smartphone – disrupts the body’s circadian rhythms. New research by a team at the University of Toledo, however, has shown that blue light in the 445 nanometer wavelength can have a particularly damaging effect on the body.

The paper published in the journal Scientific Reports shows that close or prolonged exposure to the 445 nanometer shortwave called “blue light” can trigger irreversible damage in cells.

That may sound scary – but there’s no reason to panic.

“Photoreceptors are like the vehicle. Retinal is the gas,” explains study author and University of Toledo chemistry professor Ajith Karunarathne.

During the study, researchers exposed cells directly to blue light. The goal was to mimic what happens when we stare at our phones or computer screens for a long period of time. Researchers found that the high-intensity blue waves trigger a chemical reaction in retinal molecules. Specifically, the blue light causes the reintal to oxidize, creating a “toxic chemical species” within the cell. The retinal is then energized by the blue light, and the retinal starts to kill cells. These cells do not grow back after being damaged.

In other words, retinal is the ‘gas’ in the chemical reaction and blue light is the dangerous spark.

Should we stop using all electronic displays? Should blue light be disabled on all smartphones or computer screens?

Researchers claim that blue light doesn’t necessarily mean catastrophic damage to your vision will occur. The changes in retinal observed in the study could lead to macular degeneration – an incurable disease where your vision becomes blurry over time before eventually disappearing altogether. However, it’s also possible that the effects in the study were only true in a petri dish – and the effects may not be observed in a real human eye.

It’s also important to note that blue light doesn’t just come from our smartphones and electronic devices. Blue light also occurs naturally in sunlight. Of course, we also don’t spend much time staring directly at the sun – while we do spend significant time staring at our digital devices.

A 2016 Nielsen poll indicates that the average American spends 11 hours per day staring a device.

The Most Concerning Effect of Blue Light is Sleeplessness

Meanwhile, all research on how a real human eye reacts to blue light has failed to link blue light to permanent eye damage. There is no confirmed link between exposure to blue light and macular degeneration – despite the fact that cells in a petri dish seemed to be permanently damaged by blue light.

There is one confirmed effect of blue light, however: sleeplessness.

A growing number of smartphones now come with automatic dimming features – similar to the popular f.lux software that has existed on desktop computers for years. The software doesn’t just dim the screen; it reduces the amount of blue light on the screen. You can still use your smartphone, but it’s not going to disrupt your sleep patterns.

Both iOS and Android now offer some type of night shift setting to ensure you can use your phone without sacrificing your sleep.

It’s no secret that blue light messes with vision and sleep patterns. As mentioned by Amber Case, author of the book Calm Technology, the military has used “low-impact colors” like red or orange for many of its interfaces for decades. These colors are ideal for nighttime shifts. Operators can use the equipment without messing with their vision or sleep patterns.

Case also explains that the use of low-impact colors reduces the “visual artifacts” that are often caused by blue light. In a military situation, the sensation of being blinded by a bright, blue-lit screen can be hazardous.

Ultimately, more research needs to be performed on blue light to verify its effects. The latest paper published by University of Toledo researchers seems to indicate that blue light causes irreversible damage in eye cells. However, this effect has not yet been replicated in humans.

Consider downloading a dimming app or turning on your phone’s night shift mode the next time you’re struggling to fall asleep at night.