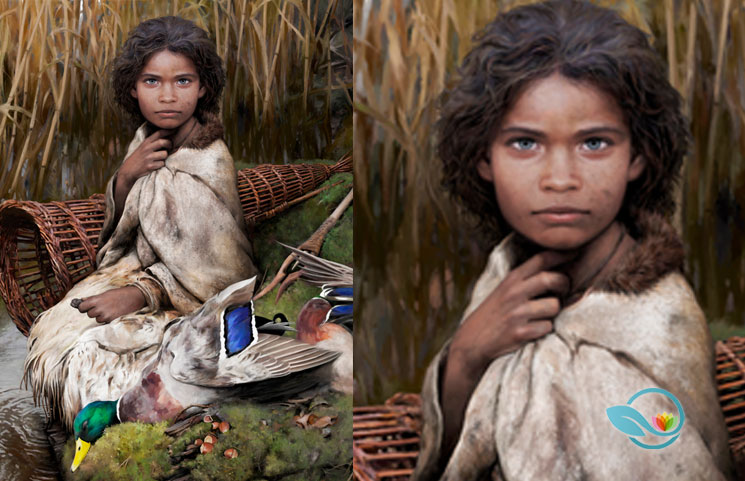 After discovering a piece of birch tar chewed by a woman from Neolithic, archaeologists have reconstructed her oral microbiome and complete genome.

Close to the Stone Age’s end, a woman with dark skin, brown hair and deep blue eyes, who was from a fishing village in the South of Denmark chewed a piece of birch tar. Named by today’s archaeologists Syltholm, her village was close to a coast lagoon and protected by sandy barrier islands in the Baltic Sea. Behind these islands, the woman and another person she was living with would trap fish using spears with bone tips.

Was She Chewing the Birch Tar to Repair a Piece of Pottery?

It’s not known if the woman was chewing the tar to repair a piece of pottery or perhaps a flint tool, since birch tar was used as an adhesive during the Stone Age period. Maybe she was just enjoying it as “chewing gum”. What’s certain is that that when she discarded it, it remained sealed under some silt and sand layers, only to be found by a team of archaeologists, 5,700 years later. The complete genome of the woman was extracted from the tar, including her oral microbiome and some DNA from the food she has eaten before chewing it.

While no remains were discovered close by, the DNA found from the birch tar revealed what the woman looked like, what she ate, the viruses and bacteria she carried, the origins of her people and if they had resorted to farming. The results of the analysis were published on Tuesday, in the Nature Communications journal, highlighting the fact that birch tar can be a source of microbial and ancient DNA. This means people today can find out more about populations in the past, their health status and what they did in order to survive. This is what the paper’s corresponding author, Hannes Schroeder, who works as an archaeologist for the University of Copenhagen, had to say about this recent finding:

“We have this inconspicuous little lump of birch pitch that someone discarded thousands of years ago, and suddenly we’re able to conjure up this person from it. It’s fascinating to be able to do that from this small object.”

Theis Jensen, a bioarchaeologist for the University of Copenhagen, came up with the idea of extracting genomic information from birch, while digging in Sweden and noticed there were many pieces of tar with signs of teeth in them. During that time, DNA sequencing was revolutionizing the way people see history. Together with his colleagues, he managed to get the partial DNA of 3 people from birch tar that was dated 10,000 years in the past. The results of the study were published in May, in Communications Biology.

Natalija Kashuba, who works as an archaeologist for the Uppsala University in Sweden and was a lead author for the Communications Biology paper, says the Syltholm birch tar sample preserved the genomic information so well because it was buried in an environment with no oxygen. Kashuba wasn’t involved in this new study, but she says that if archaeologists manage to recover more samples like this, some new information can be discovered, on how viruses and bacteria threatening humankind have developed.

Microbiome Discovered in the Syltholm Tar

The sample found at Syltholm by Schroeder and his team revealed that the woman who chewed the tar was a carrier of microbiome, which are microbes that live in and on humans without doing any harm. Some other oral bacteria discovered indicates the woman may have suffered from periodontal disease. More than this, it seems she was carrying the Epstein-Barr virus, which is from the herpesvirus family, also some virus strains that cause pneumonia. While they came across 26 virulence factors and pathogens that can infect hosts in her DNA, the woman’s health couldn’t be determined.

The Syltholm Woman Was Lactose Intolerant

Another interesting fact discovered about the Syltholm woman is that she was lactose-intolerant, which was common in the hunter-gatherers community. The tar also contained mallard (Anas platyrhynchos) and hazelnut (Corylus avellana) DNA, which was what the woman probably had eaten before chewing the tar and is usually present in the diet of a hunter-gatherer. Farming started in Denmark quite late, just about when the Styltholm woman was alive.

Archaeologists can’t yet tell if the hunter-gatherers around the village adopted farming on their own or if those who arrived later introduced them to it. According to what Schroeder and his team are saying, the woman’s genome doesn’t indicate she was related to farming communities that used to be in Denmark during her time. She’s from what archaeologists call Wester hunter-gatherers, which are groups that settled in Scandinavia and came from the south 11,700 years ago.

Agriculture Changed the Evolution of Oral Microbiomes and Human Gut

When agriculture started, the oral microbiomes and the human gut changed, as foods rich in carbohydrates became available. They changed once more during the industrial revolution, when vegetable oils and refined sugars started to be consumed. Not related to the study, the Pennsylvania State University paleomicrobiologist Laura Weyrich says it can be difficult to determine what the Syltholm woman was eating or her oral microbiome composition from only a piece of chewed tar, as bacteria from the teeth is very different from the one on the tongue or in the saliva. Weyrich thinks the woman’s microbiome is more of a mixture. She also said that a new chapter in studying the microbiome evolution has been opened by this new Syltholm study.