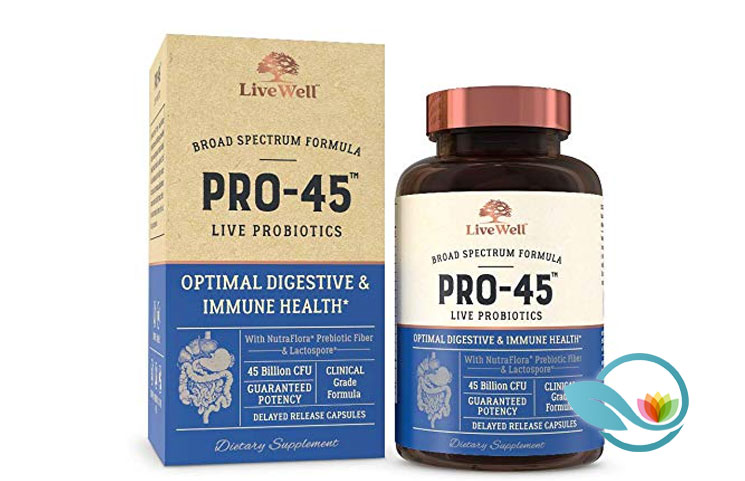 LiveWell claims to approach wellness in a holistic manner, where most of the attention is placed on one’s mental, physical and emotion health. In addition, it is a lifestyle in which the body learns to heal itself. This is supposedly all LiveWell essentials are founded on, with emphasis placed on natural ingredients. All this being said, it seems most fit to introduce LiveWell’s Pro-45.

The Pro-45 has supposedly been created with digestive and immune health in mind. Over time, consumers are expected to achieve a “balanced, awakened life.” To see how achievable this claim actually is, the following review will look closely at its purpose, key ingredients and directed uses.

What is LiveWell Pro-45 Live Probiotics?

LiveWell’s Pro-45 is probiotic supplement that delivers 45 billion CFU of live cultures per serving. It supposedly carries 11 different types of strains that have been selected based on scientific findings. Other factors that went into making the overall formula include efficient delivery of strains to the body, along with the necessary nutrients said strains require to flourish and continue to serve their roles as protective barriers.

The 11 strains of probiotics that went into this formula include a combination of lactobacilli, Bifidobacterium and Lactospore, where the latter is simply bacillus coagulans (deemed beneficial bacteria). Most of the strains work in possibly improving immune and digestive health, ridding barriers that prevent good bacteria production and in some cases are deemed essential for optimal skin health.

In addition to probiotic strains, a prebiotic fiber called Nutraflora has also been included. This is essentially nutrition for good bacteria that allows them to mature rather than being destroyed by the presence of harm.

As for how it should be included in one’s lifestyle, consumers have been advised to take one capsule daily with either a meal or a glass of water.

In general, it appears like LiveWell has hit the basics when it comes to offering an effective probiotic supplement. Normally, this necessitates a balance between pre and probiotics as well as a delayed-release, which ensures that the implanted strains and nutrients are transported where they need to be without anything going to waste.

All this being said, consumers can anticipate some bloating during the initial consumption period, however, this is believed to decay over time. Another thing consumers should be watchful of, especially when taking probiotic supplements, is the potential increase in a molecule produced in the digestive tract called histamine. When ingested, it may result induce swelling or may trigger allergic reactions.

On the whole, probiotics have been labelled as being safe, but each individual’s system varies, even in the case of good and bad bacteria. Hence, it is advised to use with caution. To learn more about LiveWell’s holistic way to gut health, click here.